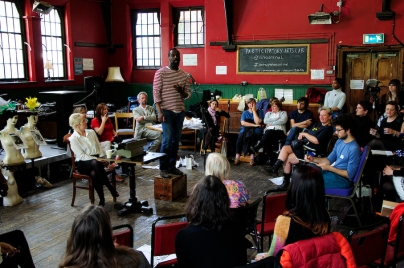 When we learnt that Goldsmiths University would no longer be running our MA programme in Participatory Arts we agreed, as a student group, that we’d like to create a legacy for the course and also open up the debate about the nature of participatory artistic practice.

Our event was a Dadaesque mock trial that accused artists, institutions, funders, critics and academia of delivering a version of participatory arts that is little more than an illusion.

Rather than describe the event in detail I’ve attached some links to key witness statements and reviews of the day.  Please remember that this was an event that blurred the boundaries between life and art and approached serious debate in a playful way. Some witnesses were obliged to commit acts of treachery while giving evidence!

Review from Stephen Pritchard-Colouring in Culture

Stephen Pritchard’s statement for the Prosecution